5 hurt in small plane crash at EAA in Oshkosh

Übermittelt vor 5 Jahren
Five people were injured Wednesday morning when a Piper Malibu crashed while landing in Oshkosh at the EAA AirVenture. One of those on board was flown to the hospital by helicopter, and Wittman Regional Airport has been temporarily closed. EAA spokesman Dick Knapinski said all five people injured were on board the Piper Malibu when it crashed shortly before 8 a.m. Wednesday on a runway at the airport. (www.jsonline.com) Mehr...

Tom Hall vor 5 Jahren 10
While it is unfortunate that this accident occurred and several people were injured, the pilot is ultimately responsible for the operation of the aircraft and safety of the passengers. By his own admission, he stalled the aircraft several hundred feet above the runway. The crash occurred well to the left of the runway and there was a high bank angle immediately before impact.

Being cleared to land does not relieve the pilot of responsibility of flying the aircraft or accepting a situation that is beyond the capabilities of his skills or the performance of the machine. A go around from 300 feet should be no problem. I have owned and flown a Malibu (and flown it into Oshkosh)and they certainly are capable of doing this and do not need special handling or need the entire runway for landing.

Oshkosh operates under a waiver for decreased separation. There is an extensive notam that covers operations. This is necessary for the volume of departures and arrivals at what is the busiest airport in the world for that week. There are 10,000+ aircraft and probably at least double that number of operations.

Considering the wide variety of aircraft with vastly different performance characteristics, the operations run very smoothly. Pilots must be on their "game" and fly with care and authority. ATC works very hard but cannot anticipate the actions of every pilot. I have flown to Oshkosh for over thirty years in many different aircraft ranging from high performance experimentals to cabin class twins and I have had to make go-arounds on a couple of occasions due to conflicting traffic or other situations that I felt were unsafe. This was initiated by me, the pilot, not by ATC. I am certainly not a "super pilot" and do not have amazing skills. Neither are the thousands of other pilots that successfully arrive and depart there every year.

Jack Rousch tried to follow a Cub on final and pancaked his Beechjet. If he had been higher, he would have likely entered a spin. We all have to allow for the fundamentals of physics.

I am not "lambasting" your friend. We all make mistakes and errors in judgment. It is terribly sad that he and his passengers were injured and his aircraft destroyed. Having witnessed the crash, I am amazed that they survived. My point is that we should not blame the system or some other pilot or aircraft. Fly the plane. Fly it until its parked. Do not give up control to ATC. Your seat is moving a lot faster than theirs. If you are not comfortable with the limitations of the notam, choose to land at one of the nearby airports and do not expose yourself and your passengers. The system is not broken and works. It is the only way that Airventure can exist and remain an event for all of GA
Antwort ↓•Permalink•Report 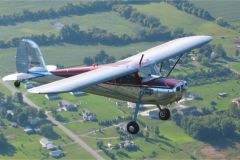 Mark Jacob vor 5 Jahren 2
I was on the south side of RWY 27 about mid field. There was a strong cross wind component from the north or right (referenced to final approach) and many aircraft drifted closer to the runway center line as they flew a right downwind. This resulted in many aircraft being flown in a tight steeply banked turn. This chain of events probably started on the downwind leg. Having flow the approach a day earlier in similar wind conditions in a twin taildrgger it is a tough >180 degree right turn from the crabbed to the left downwind leg to a nearly non existent base leg to final. Then land dirty air from prior departures.
Antwort ↓•Permalink•Report

Tom Hall vor 5 Jahren 2
I was speaking in the generic "Beechjet" and you are correct. I certainly do not suppose to know all the circumstances and I'm sure that NTSB will diligently examine, but assuming the referenced quotes regarding stalling and in the absence of control failure, I would strongly doubt that they would find other than loss of control.

My reason for commenting at all was NOT to criticize the pilot. I was primarily defending the system which I felt was being attacked. It certainly is not perfect, but makes the event possible and considering the numbers of pilots, aircraft and vastly differing performance profiles and levels of experience, works amazing well with very few serious problems. They do occur and that is tragic. I was heart-sick when I saw this crash, as was everyone else. In the end, the pilot managed to salvage a survivable crash which was truly incredible. Those who saw it felt that there would be not survivors. I hope a full and speedy recovery to all.
Antwort ↓•Permalink•Report

Loral Thomas vor 5 Jahren 2
Thought you might hearing what happened from the owner of the Malibu:

Originally Posted by Piper Forum
Sorry it took so long for me to chime in. As everyone knows my plane, N4BP, crashed yesterday. I have been in contact with my friend who was piloting the airplane since the accident happened. He first called me from the ambulance and gave me a short version of the events. I have spoken with him numerous times since and think I have a good idea as to what happened. I also pulled the ATC recordings that coincide with the story I was told.

According to Kenny, he saw a twin engine plane, likely a baron take the runway. He assumed that the plane was going to hold for release as there was no radio chatter from the tower telling the baron to takeoff. Kenny then saw the baron starting his takeoff roll which would have put the Malibu and baron on a collision course at the green dot. The tower controller instructed him to land at the Orange dot which was 1500 feet sooner. On his short final he was at 90 kts and already had power out of the plane. He cut power and tried landing short, the plane entered a stall that was unrecoverable. He estimates that he stalled at 250-300 ft agl. Once in the stall he attempted to add full power and recover but there was no elevator/aileron/rudder response.

The middle seat occupants walked away. His father in the back seat suffered a fractured femur and collapsed lung. The passenger in the co-pilot seat took the worst hit and is still in ICU. Kenny suffered some nasty head lacerations, broken ribs and a fractured ankle.

Truly unfortunate situation. I'd like to know more about the airplane that incurred the runway. Last I knew the FAA/NTSB/Tower personnel were trying to find the plane. Who knows if they will be able to or not. How can you maintain controlled airspace and runway environment when you have no way of identifying aircraft other than by their color? I can't believe that this type of procedure and activity are continued to be used. It's a flawed system and something needs to be done to better handle the traffic. Close the airport for arrivals only on the main runway? It doesn't excuse the fact that my buddy found himself in a power off stall that could have been avoided but measures need to be taken to ensure this type of incursion doesn't happen again at OSH or anywhere for that matter.

One last thought.... Who is going to land a PA46 at the mid point of the runway? He should have been given the whole strip. I know the pilot can always say "unable....." Lets try and use this as a learning experience and not lambaste my buddy for what he didn't do. This accident could have very easily turned out much worse than it did.

sparkie624 vor 5 Jahren 1
Sorry to hear it... Bad news... Glad everyone survived, and I hope they are out of the Hospital Soon.
Antwort ↓•Permalink•Report

dee9bee vor 5 Jahren 1
That's all well and good but not a reason for the crash in and of itself.
Antwort ↓•Permalink•Report

dee9bee vor 5 Jahren 1
My reply was directed at Mr Harris and ended up in the wrong place, sorry...
Antwort ↓•Permalink•Übergeordnetes Element•Report 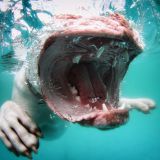 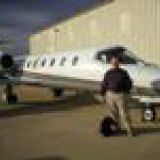 Patrick Harris vor 5 Jahren 1
Pilot reported someone pulled in front of him while landing.
Antwort ↓•Permalink•Report 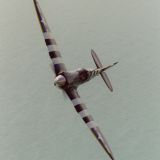 COYOTEHUNTER vor 5 Jahren 1
Glad to hear there were no fatalities... Since the accident has happened, , let us now learn why, so a similar accident does not happen again... With as many people as there were at OSH, there will surely be many eye witnesses. (Hopefully
Antwort ↓•Permalink•Report

allench1 vor 5 Jahren 0
Tom you make some informative comments, but I will hold off on the judgment you made about the pilot flying as we were not in his seat, I think it prudent to let the NTSB do their job before jumping to an early assumption, also Jack flew a Premier 1A not a beechjet.
Antwort ↓•Permalink•Report

allench1 vor 5 Jahren 0
I agree Tom however the engine could have not responded to his power-up or he could have arrested his descent before adding power. 1. is not his fault. 2. would be his mistake, so it could be either way. just saying, nevertheless you wrote a good piece and are obviously a proficient pilot as I am with many hours punching holes in the sky.
Antwort ↓•Permalink•Report

Anatoly Lubarsky vor 5 Jahren 0
Excellent writing Tom Hall! I wonder if the stall warning was working properly, because at the stall signal, it is level the wings, push the nose down and add power as needed to recover maneuverability. It worked for me once even when the engine did not start.
Antwort ↓•Permalink•Report

bentwing60 vor 5 Jahren -1
It ain't the clubs! Seems like some race car guy did that in his Beech Premier a couple a years ago.
Antwort ↓•Permalink•Report